The Five Whys: The Key to Effective Problem Solving 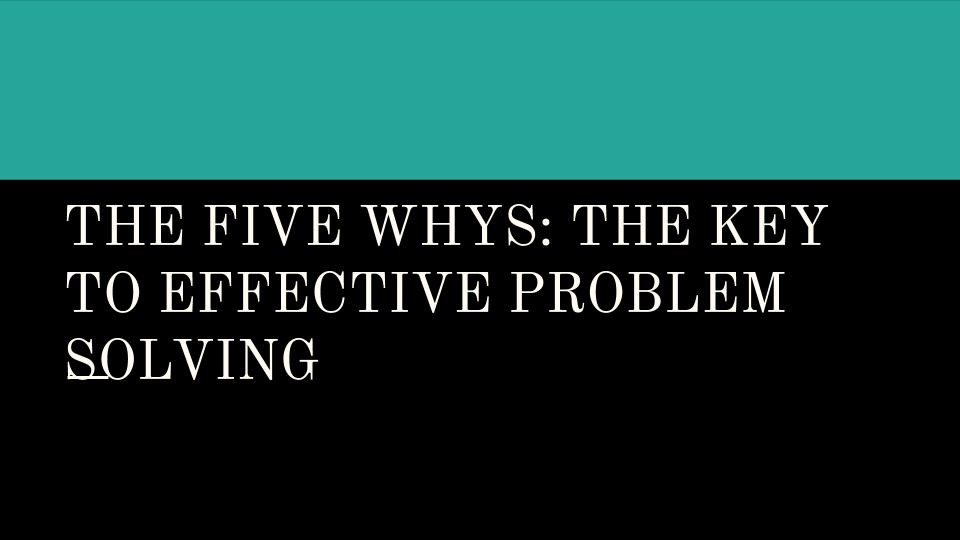 It is always good to stay in tune with your plant operations. During Industrial Operations, there are often differing problems that will develop along the production journey. With a high quality Daily Management system, an off target parameter will trigger that there is a deviation from a target, and the next steps toward solution will involve a problem solving process.

There are differing levels of problems in the industrial sphere. Some are more readily solved and treatable on the spot. Recurrent or systematic problems are ones that require a little more in-depth analysis. For Operational staff, it is always a good idea to ensure that there are systems in place that will facilitate the solving of these problems.

One such technique, that is still relevant in our 2020 Industry 4.0 evolving world, is a technique known as the 5Y (WHY) method. What this tool does, is allow the analysts to ensure that there are no further questions that can be asked about a system where its particular issue of focus is concerned.

Origins of the 5 Whys Technique

Developed in the 1930’s the 5 WHYS technique is one that enables the right decisions to be made on the shop floor. It is a realistic realization of what is actually causing a problem in the field to manifest. Why is your heater not achieving its exit temperature? Why is your Variable frequency drive pump not reaching full throttle? Why is the steam pressure relief valve opening more frequently than normal? All of these and more…can be solved using the 5 WHYS. With a little Industry 4.0 modification, you can actually be able to identify root causes that are supported by data.

UTILIZATION OF THE 5 WHYS METHODOLOGY

In the industrial sphere, the 5 WHYS is part of the problem solving methodology, once a trigger is notified in the Daily Management System. There is normally a template that individuals who are problem solving will utilize. Let us work with an example of a heater that is not achieving its exit temperature. Our aim is to identify what went wrong, and what Industry 4.0 tools we can utilize to determine what the root cause of the issue is. Utilizing a problem solving model:

During your problem solving time, you can assemble a team of persons who were present when the problem occurred  such as the relevant supervisor or the relevant operator for the unit under analysis. The rest of the team can comprise of the individuals who will then be able to fix the problem such as your process engineers, mechanical engineers and process control engineers.

The problem solving lead will then start the exercise, identifying that there was a problem with the performance of the T5 heater on the second unit of Operation A. The heater exit temperature flagged red on the Daily Management system for three days and the team felt it important to identify what the issue was.

The team will then observe the problem in action. With the help of a process engineer, the relevant data pertaining to the heater exit temperature can be collated from the company’s cloud server. The controls team would have taken the time to ensure that there was a temperature sensor on the heater, and as a result, the process engineer would then be able to look at a control schematic, find the heater sensor, and pull the data from that unit via the control system database.

For the defined problem, “T5 heater isn’t meeting its exit temperature targets”, the statement will be written on a problem solving sheet or on a visible board. The team lead will then proceed to ask “Why?”

Why is asked until there is sufficient evidence to ensure that the root cause of the problem was found. The team, via the data and an understanding of the process activities for that interim will be able to identify what caused the heater to be out of specification in terms of its exit temperature.

Once the root cause is known, the appropriate action plan can then be implemented to rectify the problem. The Five Whys is a great tool for problem solving. With data from the cloud, and the process control system, individuals can see into equipment and be able to determine the point of discrepancy in a machine. Knowledge is power and ensuring that your team is empowered, you’ll be able to identify how best to keep your operations running at peak.