PDCA cycle is one of the simplest and the easiest management approaches for process control and continuous improvement.

It is also called Deming’s cycle or Shewhart cycle.

Sometimes it is also called a PDSA cycle: Plan-do-Study-Act.

It is used for a new product or concept development, problem solving, project implementation and many other fields.

Origin of the PDCA Cycle

PDCA cycle was originally proposed by Shewhart in 1950s in a different format. When he proposed, he had only three components in the cycle. They are: Specification – Production – Inspection. He defined in keeping in mind the Production and manufacturing processes that he worked on for improvement. It was used by various people for various purposes since then.

The famous Edward Deming often advocated for this in his speeches and books. Only in later 1950s it took a new life in the form of PDCA cycle. Deming often referred PDCA as Shewhart’s cycle. But because of the promotions done by Deming, it came to be known as Deming’s cycle.  Deming made a small change to it and called it PDSA, as he wanted to give more emphasis on ‘Analysis’ rather than just ‘Inspection’ or ‘Checking’.

Applications of the PDCA Cycle

What does a PDCA cycle do?

PDCA cycle advocated by Deming finds an important place in continual improvement. It helps a process to improve its performance on a staged and steady manner. The below diagram is a very popular one amongst Quality professionals and management text books. 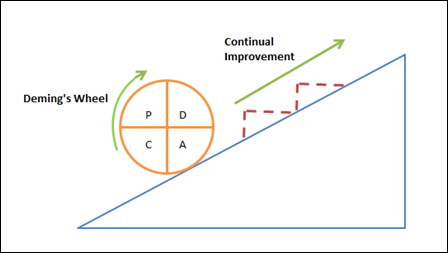 Let us now see, the activities in each stage of a PDCA Cycle.

Thus the PDCA cycle will help in improving the performance of a process stage by stage in a steady and levelled manner.