Have you heard of the terms Control limits and Specification limits? Do these terms confuse you? Are you trying to find out the relation between the two terms? Are you wondering whether these terms are one and the same or different? Confused with when and where to use these terminologies? This article will provide you clarity on what these two terms are and the difference between the two.

Specification limits are the targets set for the process/product by customer or market performance or internal target. In short it is the intended result on the metric that is measured.

Control limits on the other hand are the indicators of the variation in the performance of the process. It is the actual values that the process is operating on. It is the real time value.

The below diagram shows how, Specification limits and Control limits can vary. 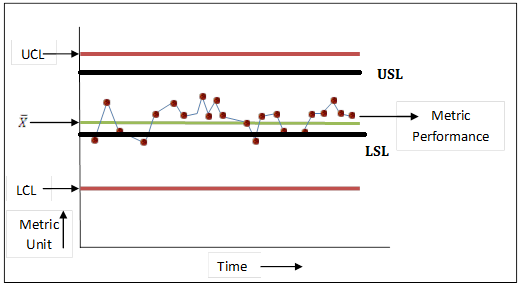 Let us illustrate with an example: Suppose an athlete wants to participate in 200 m race in Olympics. He approaches a coach and asks him to guide him for the same. The Coach, will show him the recent best performance records and tell that, “In order to win the game, you need to run at a target speed of 20- 25 seconds”. Because, 20s-25s is the speed of the winning participants observed from the previous games. Now, our athlete starts his practice and his performance is tracked. His performance ranges from 22s – 30s (3 Sigma deviations from the average performance). Now the target is 20-25 seconds whereas the actual performance is 18s to 26s.

Another important parameter that should be noted here is: Control limits are used to assess the variation level in the performance. Our athlete’s performance varies from 18-26 which might be a huge limitation for a game like Olympics. Other players might show consistent performance, which will win them a chance to be a part of the game. Imagine another player, with performance range 20-24 s. Both the players average performance is the same, 24s. But the second player shows less variation and consistency and hence he will be preferred over the first player.

Imagine, a third payer having a control limit of 20-22 s, again this player is showing consistency, but he is reaching the target in fewer seconds and also shows less variation. The third player will be given preference of the three players.

The above example clearly explains how and when Control limits and Specification limits are used.

Next post: Difference between Confidence Level and Confidence Interval