Complexity Leadership Theory was first introduced in 2001 by Mary Uhl-Bien, Russ Marion, and Bill McKelvey. It was based on a branch of scientific thought called Complexity Theory, a theory that is used to model interactions within complex systems. The general idea of Complexity Leadership Theory was to consider what worked well within these complex systems and strive to apply it to leading teams and organizations.

A primary component of complex systems is that they are nearly impossible to predict, the accuracy of any prediction fades as time passes. Think of weather predictions; a weatherman can usually do pretty good making a prediction for what tomorrow looks like, but next week becomes a little less accurate. You can forget getting an accurate prediction 6-months from now.

The world’s economy to the hive structure of bees; you can’t predict either of them very far out into the future. This difficult to predict factor applies to any complex system, including everything from the natural world to the human world.

Yet, we still try to structure our economy and the companies/corporations contained within it like we can predict what will happen far out in advance. This sets people up for near-constant failure. One can look at many organizations project failure rate (as high as 70% for some organizations – Billows, 2019) to see how this reliance on predicting the future can have negative impacts on an organization.

The Delicate Balance between Order and Disorder: Some Advantages of Complexity Leadership

There is a delicate balance between a system that is in absolute chaos and a system that is so stifled with rules and order that it hinders creativity and adaptability. Balancing on the edge of chaos can increase the innovation of companies, but be structured enough to help control the path of that innovation. It isn’t an easy feat to attain that balance. While every corporation could do it, most corporations would struggle with it because it requires trust and relinquishing control from the traditional and strict top-down hierarchal structure.

Complexity Leadership Theory aims to take an organization into that balanced zone and maintain it there. In this way, it is believed that organizations get the best of both worlds. 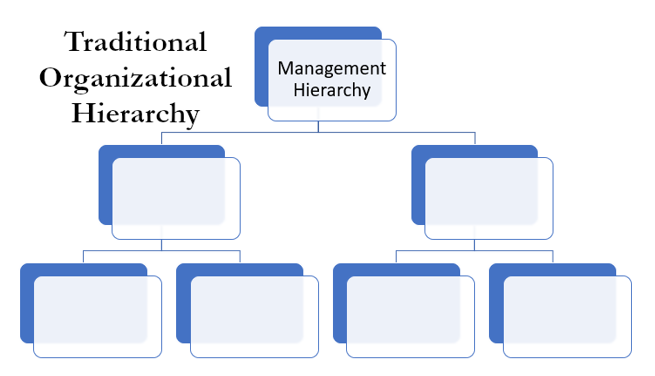 Check out this video for an overview of Complex Adaptive Systems.

No one is going to predict the feature. They can make some guesses, but the further away in time they move from their prediction, the more likely they will be wrong. If they manage to predict with any accuracy the details to events several years into the future, they were lucky.

This is why you should not waste too much time planning the details. One aspect of Complexity Theory is Chaos Theory, particularly something known as the Butterfly Effect. Within the Butterfly Effect, it is expected that the smallest changes can throw off an entire system in unpredictable ways.

Instead, you should start off with broad goals. Get a general idea (not detailed) about what you want to achieve. Plan the details when they need to be planned, directly before implementation.

Over-reliance on rules and order have a tendency to stifle creativity. Employees will focus on following the detailed specifications and never bring in their own thoughts to the processes or to the organization. This may work in a factory where precise methods of doing work need to be followed, but it doesn’t work well when you need employees to be creative or innovative.

Instead, give employees basic parameters to follow. Let them bring in their creativity and own the project. Guide but don’t dictate. Research has shown that this tends to create a more innovative environment with higher-performing and more loyal employees.

Most organizations rely on a standard organizational model that uses a top-down hierarchy to control the organization. Complexity Leadership proposes a flatter model where people move and flex as the organization changes. The employees handle how to get their work done and work with whomever they need to so goals can be achieved.

Sometimes referred to as “Wicked Questions,” these can range from fairly simple questions that ask why something is being done at all to more complex process-related issues. If you don’t know why something is the way it is, the question needs to be asked.

More importantly, answers need to be found for those questions. If no one knows why, then figure out why. Find an answer to these “Wicked Questions.” Finding those answers can justify huge costs, or it can illuminate a path to cost reduction.

Organizations often have formal rules for doing things or rules dictating processes. They have rules for everything. There are the rules, and there is what the employees actually do to get things done. Many organizations hinder their own progress, they wrap everything up in bureaucratic processes and cumbersome restrictions.

But the employees then subvert those rules, ignoring the red tape, and they do those things that need to get done to move progress along. Organizations should look for these hidden shadow systems and eliminate their burdensome processes.

Let the system emerge from the ground up. Don’t dictate from the top down how it should look. Natural complex systems form from the smallest pieces, the greater organization evolves around them.

Within a company/organization, this means that the employees help to guide how the organization should be structured. They aren’t told how to organize, they build the organization in as they go, and adapt it when the need arises.

Complexity Leadership Theory can be a challenge to fully implement, but even bringing in many of the ideas within it can have huge and positive impacts on an organization.

Next post: Preventative Maintenance Program in the Context of Six Sigma